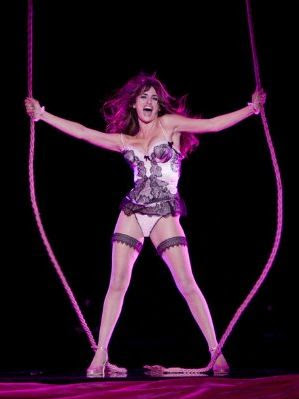 Penelope Cruz as "Carla" in NINE

The brand new website for the upcoming motion picture NINE has gone "live" and you can visit it by clicking here.

The big screen adaptation of NINE THE MUSICAL stars Daniel Day-Lewis, Penelope Cruz and Nicole Kidman. The all-star cast is directed by Rob Marshall, who also helmed critically-acclaimed 2002 musical Chicago - which garnered six Academy Awards. Daniel Day-Lewis replaced the previously attached Javier Bardem in the leading role of Guido Contini, Bardem left the project citing exhaustion. Marion Cotillard, Kate Hudson, Stacy "Fergie" Ferguson, Sophia Loren and Judi Dench star in the film as well. Nine is a musical with a book by Arthur Kopit and music and lyrics by Maury Yeston and is based off of Fredrico Fellini's movie 8 1/2. The play tells the story of a highly stressed director living in Venice trying to juggle all of the women in his life.

The Broadway production of Nine, directed by Tommy Tune and choreographed by Thommie Walsh, opened on May 9, 1982 at the 46th Street Theatre, where it ran for 729 performances. The musical won five Tony Awards, including best musical.

Nine revolves around one central character, Guido Contini a film director in the Fellini mold. He is contracted to write and direct a film, but is unable to come up with a suitable plot. After recent box office failures, he finds himself drifting towards a nervous breakdown. Guido finds himself examining his past flawed relationships with the many women who have come through his life and the struggle to act his mature age of 40 as opposed to "nine".

Posted by Schmoozequeen at 10:11 AM