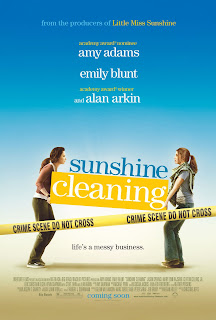 From the producers of 'Little Miss Sunshine' comes 'Sunshine Cleaning'. A single mom and her slacker sister find an unexpected way to turn their lives around in the off-beat dramedy. Directed by Christine Jeffs (Rain, Sylvia), this uplifting film about an average family that finds the path to its dreams in an unlikely setting screened in competition at the 2008 Sundance Film Festival. 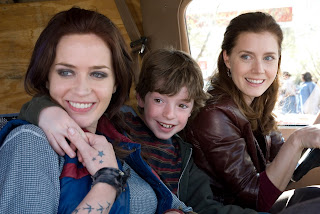 Once the high school cheerleading captain who dated the quarterback, Rose Lorkowski (Amy Adams) now finds herself a thirty-something single mother working as a maid. Her sister Norah, (Emily Blunt), is still living at home with their dad Joe (Alan Arkin), a salesman with a lifelong history of ill-fated get rich quick schemes. 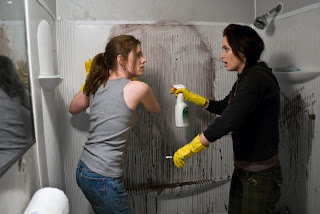 (Left to right.) Amy Adams and Emily Blunt
Photo Credit: Lacey Terrell
© 2009 Big Beach, Overture Films
Desperate to get her son into a better school, Rose persuades Norah to go into the crime scene clean-up business with her to make some quick cash. In no time, the girls are up to their elbows in murders, suicides and other…specialized situations. As they climb the ranks in a very dirty job, the sisters find new respect for one another and the closeness they have always craved finally blossoms. By building their own improbable business, Rose and Norah open the door to the joys and challenges of being there for one another—no matter what—while discovering personal healing in the most unexpected way.

'Sunshine Cleaning' opens in select theatres March 19, 2009.
Posted by Schmoozequeen at 1:38 PM No comments: Links to this post

Hater is one man’s story of his place in a world gone mad— a world infected with fear, violence, and HATE.

'Hater' is currently in pre-production with an expected release date of 2010.

Posted by Schmoozequeen at 6:03 AM No comments: Links to this post 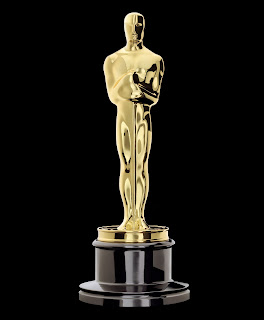 How to throw an award-winning Oscar® Night party at home...
Let Master Chef Wolfgang Puck, Pastry Chef Sherry Yard (author of Desserts by the Yard) and Event Producer Cheryl Cecchetto (founder and president of Sequoia Productions) show you how to cook, bake, plan and star in your own party!

Numerous parties are being held across North America. Check out an Oscar® Night America party near you!
Posted by Schmoozequeen at 9:08 PM No comments: Links to this post

"Sex and the City 2" is coming to a theatre near you next year...

As on the original, John Melfi and Parker will be producers on the sequel with King.

If there was a steady stream of speculation about plot points on the first picture, it will be a veritable geyser here, especially since Parker's Carrie and Chris Noth's Mr. Big, of course the property's principal relationship, was resolved matrimonially at the close of the first pic.

King has said that he's going to switch up the tone and throw in surprises in a potential sequel.

In a statement King said: "I'm very excited to work with these amazing actresses again and would love to give everyone more information about the sequel ... but I'm busy with my Sex life."

Filming is expected to begin this summer with a scheduled 2010 release date.

The film performed impressively with $152 million domestically and $260 million more from international markets, which had been sold off by New Line to finance the project.

Source: RiskyBizBlog.com
DigitalSpy.com
Posted by Schmoozequeen at 4:40 AM No comments: Links to this post

High Profile Actress to Star in "The Orphanage" Remake

Variety.com is reporting today that the rumored The Orphanage remake is in full-swing over at New Line Cinema with greenlit status anticipated for 2009. According to the report, the film will be an English language remake "with Guillermo Del Toro producing.

Juan Antonio Bayona directed the original The Orphanage, El Orfanato, and was asked by the producer of the U.S. remake, Guillermo del Toro, if he would like to direct it.

He said no, but he's keen on someone else to make the film again, and a number of times. He likes the idea of remakes.

Juan Antonio Bayona called Guillermo del Toro's offer to helm the remake very generous, and that he was the first to be offered, yet he didn't want to do it and would rather move onto something else.

In fact he's not opposed to the idea of remakes, and actually quite likes them.

Without a director though it seems the film is moving forward, and word is that a high profile actress has taken up the lead role in the Hollywood remake, although as yet we don't know who.

Source: Variety.com, Filmstalker.co.uk
Posted by Schmoozequeen at 6:59 AM No comments: Links to this post

Two current "buzz" movies with the same title? Believe it! 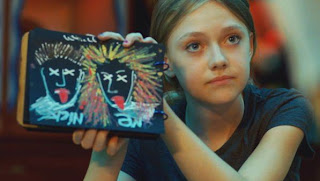 There are special people in this world that have been born with psychic powers. In 1945, government agencies set up for psychic warfare, trying to turn those people with abilities into soldiers. After the war, governments began to set up divisions with agents trained to hunt them down like animals, test and categorize them. There are a bunch of different types of psychic abilities: A watcher can see the future, A mover is telekinetic, Sniffers who can see the history of an object, Shifts can temporarily change the shape of things, Wipers can wipe your memory, and pushers can put thoughts in other peoples heads. The divisions are trying to develop a drug which would allow normal people to develop psychic abilities, but apparently every test so far has been fatal. Cassie Holmes (Dakota Fanning), a watcher, teams with a young man named Nick Grant (Chris Evans), to take on a clandestine agency in a race against time the will determine the future of civilization. The film also stars Camilla Belle and Djimon Hounsou.

Push: Based on the Novel by Sapphire 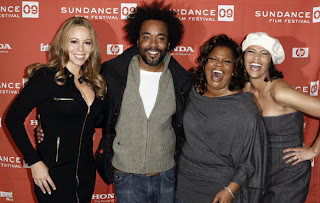 From left, Mariah Carey, director Lee Daniels, Mo'Nique and Paula Patton
at the Sundance Film Festival premiere of award-winning
"Push: Based on the Novel by Sapphire" (Matt Sayles/Associated Press)

"Push: Based on the Novel by Sapphire" (now that's a mouthful), won the Grand Jury Prize and the Audience Award at the 2009 Sundance Film Festival as is about an overweight, illiterate African-American teen in Harlem who is about to give birth to her second child when she is accepted into an alternative school.

"Push: Based on the Novel by Sapphire" also earned a special jury prize for acting for comedian Mo'Nique, who portrayed the girl's mother.

'This is speaking for every minority that's in Harlem, that's in Detroit, that's in Watts, that's being abused, that can't read, that's obese and that we turn our back on'—Push director Lee Daniels

"This movie made us laugh, made us cry and basically blew our minds," writer/director Mike White, a member of the five-person jury that picked the movie, told the audience at the awards ceremony on Saturday night in Park City.

"This is so important to me because this is speaking for every minority that's in Harlem, that's in Detroit, that's in Watts, that's being abused, that can't read, that's obese and that we turn our back on," said the film's director, Lee Daniels, as he picked up the audience award.

"And this is for every gay little boy and girl that's being tortured. If I can do this ... y'all can do this."

Based on the 1996 first novel by the poet Sapphire, the film also stars Mariah Carey and Paula Patton alongside newcomer Gabourey Sidibe, who portrays pregnant 16-year-old Precious Jones.

Lionsgate has purchased North American distribution rights to "Push: Based on the Novel by Sapphire." Oprah Winfrey and Tyler Perry will support Lionsgate's distribution through their respective motion picture companies, Harpo Films and 34th Street Films.

Posted by Schmoozequeen at 3:21 PM No comments: Links to this post

"If I can get here, so can you," the 52-year-old Boyle told the audience in a brief acceptance speech. "Dream kind, dream hard." This is Mr. Boyle's first DGA Feature Film Award.

Following the welcome by DGA President Michael Apted to an audience of more than 1,500 guests, actor/comedian Jon Cryer (Two and a Half Men) hosted the ceremony. Jon Cryer subbed as the emcee for Carl Reiner, who took ill Friday from food poisoning. Reiner had served as host for 21 years.

Cryer noted that he's also a member of the DGA, which he noted has "awesome" health insurance that includes coverage of therapy. "Imagine if SAG covered therapy," he quipped. 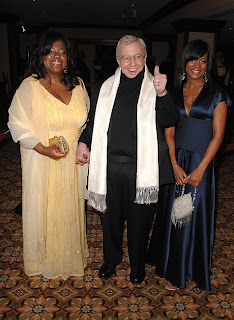 Roger Ebert with wife Chaz Hammelsmith Ebert
and stepdaughter Sonia
Chicago Sun-Times film critic Roger Ebert, who can no longer speak due to complications from thyroid cancer, received a standing ovation when honored with an honorary lifetime membership in the guild along with recorded testimonials from Steven Spielberg, Patty Jenkins, Clint Eastwood, Martin Scorsese and Oliver Stone.

"I think it's very brave of directors to give a critic an honorary membership," Ebert said in a statement read by his wife. "The person responsible above all else for a film is the director."

DGA Second Vice-President/Director William M. Brady - Robert B. Aldrich Award for extraordinary service to the DGA and to its membership.

The DGA Award for Outstanding Directorial Achievement in Feature Film has traditionally been one of the industry's most accurate barometers for who will win the Best Director Academy Award.

Only six times since the DGA Awards began in 1948 has the Feature Film winner not gone on to win the corresponding Academy Award.

Source: Directors Guild of America
Variety.com
Posted by Schmoozequeen at 5:59 AM No comments: Links to this post