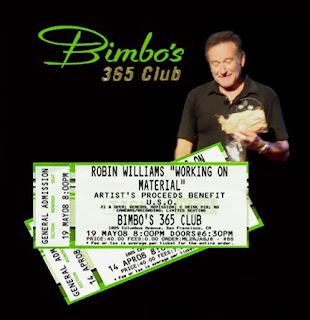 Robin Williams performs "Working on Material" shows in intimate venues in his hometown of San Francisco in order to prepare for his annual MGM Grand Vegas show held on the May long weekend. He donates all of the "Working on Material" show proceeds to various humanitarian causes. This past month in addition to his shows at Bimbo's 365 Club, he performed 3 shows each at the Acme Comedy company in Minneapolis and the Showbox in Seattle, and several in the past two months at the Throckmorton Theatre in Mill Valley. According to my sources, the month before Williams and Dana Carvey were at a house party fundraiser for personal friend and Democratic Candidate Al Frankin. Williams and Carvey entertained onlookers by talking back and forth about George Bush in the different character voices they do. It was hysterical! Maybe his Minneapolis shows coincided with an Al Frankin visit. That's my guess.

I attended two of Robin's "Working on Material" shows, one month apart at Bimbos 365 Club in San Francisco. Both shows were different.

On April 14th while waiting in line for an hour an a half, I hooked up with a few cool people and had a blast. When the doors finally opened we bolted into the club and scored a center table in the third row. The audience was predominantly in their late twenties and thirties.

Highlights from the April 14th show include "The Torch ceremony" described in an Asian accent; sports & steroid enhancements; the Obama / Clinton circus; Jack Nicholson's sizzling sex & drug scandals (hilarious); and polite Canadians! How about those those smokin' French Canucks! Eh? I laughed so hard I cried.

Williams is completely adored by hometown residents. Just ask anyone on the streets of San Francisco. 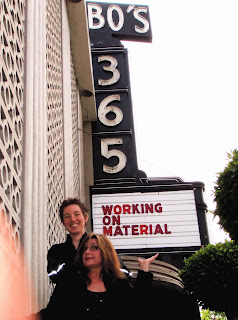 The May 19th show audience was a much older group comprised of grey, white and blue hairs. The show featured many more sex jokes and was on the whole a completely different set. The man behind me kept gasping. I thought he was going to have a heart attack. The "vagina" word does that to some people. That's probably why Oprah refers to it as "vajayjay". The "F" word was used regularly too.

Lines that killed me included . . .

"Its amazing how many dacrons died to make that" (directed at audience member wearing a leopard print).

"F'n Blackeberry broke down. I don't know what I'm gonna do. I actually had to talk to people. That's F'd up man!"

"Bejing is so polluted it makes LA look like Telluride".

"We've had the special olympics of politics for a long time".

On Jack Nicholson running for politics..."You'd never have a sex scandal because Jack's F'd everyone!"

When asked after the show what their favorite Robin Williams bit was no one seemed to remember. Specifically what? Who knows! The master works his magic skillfully. Its like watching an overcaffeinated, overzealous, human rollercoaster in motion. Aspiring stand-up comic and Williams fan, Steve Eddy had this to say about the show.

Bimbo's provided the perfect intimate setting and the sound was fabulous. Tickets were reasonably priced at $40 and all of the profits went to charity, namely "Challenged Athletes Operation Rebound" and the "USO". A variety of charities benefitted from the "Working on Material" April and May shows.

If you get a chance to see Williams perform, please do so. You owe it to yourself to check out this international treasure live! Same time next year. Count me in! 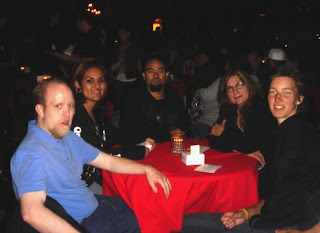 (Left to right Steve Eddy, Ashley, Mike, yours truly, and Linda)
Posted by Schmoozequeen at 1:38 AM No comments: Links to this post 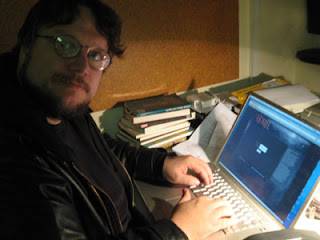 Close to 6,000 fans asked almost 4,000 questions before the chat started and then asked another one question per second during the hour the chat was running. In other words, a total of over 7,000 questions. Several people (not least Peter and Guillermo) worked hard to sift through the questions and in the end answered 60 questions. One for every minute.

Peter and Guillermo would like to thank all the fans who made this a great event. They enjoyed it and look forward to be able to share more as the adventure takes shape as you can see from their comments. 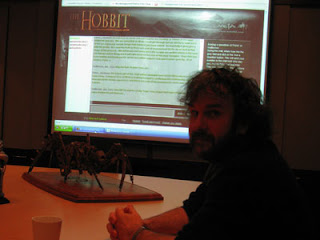 Posted by Schmoozequeen at 5:47 PM No comments: Links to this post 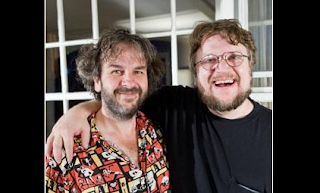 "The Hobbit", An Unexpected Party!

Peter sends along this special invitation...

Several years ago - it seems a lifetime now - I invited 20 questions from fans right at the start of embarking on The Lord of the Rings trilogy. For me, it was an important and enjoyable moment, when I was able to begin a relationship that helped define our attitude to that unique project. It gave me a sense of responsibility that stayed etched in my brain for the next 5 years.

Well, the time has come again! With us right on the cusp of beginning pre-production on The Hobbit, and its companion movie, it seems fitting to do the same thing again.

It’s also fitting that our director, Guillermo Del Toro, will join me in answering the questions, since he will be bringing his considerable personal vision to these two movies. It’s my moment to hand the baton to Guillermo. It’s time for him to address your concerns.

So this is how it will work: we ask fans with an interest in The Hobbit or The Lord of the Rings to send one question to this website. Ask us anything! Guillermo and I will select and answer the 20 most common questions, so we can both attempt to address the key issues as best we can.

Our answers will be released during a one hour live web chat, hosted by Weta, with both Guillermo and myself logged on. In addition to answering your 20 questions - for the entire hour, we’ll take additional live questions and chat about the projects with anybody who’s interested.

Please send us your questions and Register for the live chat - and we’ll talk to you in a couple of weeks!

Posted by Schmoozequeen at 12:21 AM No comments: Links to this post 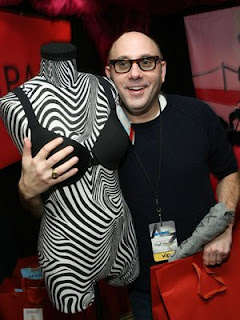 Featuring a discussion with Willie Garson, Sex and the City’s Stanford Blatch, through an interactive audience Q&A hosted by KRON-TV’s Jan Wahl.

SKYY Vodka, the official vodka sponsor of the movie, presents an advanced screening of Sex and the City to benefit local charity organizations STOP AIDS Project and San Francisco AIDS Foundation. Be among the first to find out how Carrie, Samantha, Miranda and Charlotte have continued their lives since leaving the small screen in 2004 and speak directly with the actor that played Carrie’s loyal and quick-witted sidekick, Willie Garson.

Tickets are still available for the Los Angeles exclusive pre-release screening benefit on May 29th. Visit www.skyy.com/sexandthecity for further information.


Posted by Schmoozequeen at 9:26 AM No comments: Links to this post 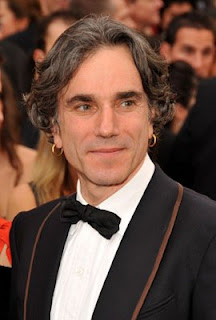 Several months ago, at the height of awards season I was thrilled to hear Harvey Weinstein was casting two of my favorite Oscar® Nominees Javier Bardem of "No Country for Old Men" and Marion Cotillard of "La Vie En Rose" in a new musical titled "Nine". Bardem later dropped out of the film due to exhaustion from work and awards season.

I caught a glimpse of Marion Cotillard and Daniel Day-Lewis on the Red Carpet of the Palm Springs International Film Festival Awards Show Gala earlier this year. Cotillard was awarded with the Breakthrough Performance Award for "La Vie en Rose" and DDL was honored with the Desert Palm Achievement Award for "There Will Be Blood". Both won Oscars® in their respective categories. I was delighted and rendered speachless when DDL magically appeared on the Red Carpet heading towards me. He smiled and expressed a soft heartfelt "thankyou" after I blurted out "you are absolutely brilliant!" His charm and charisma swept the female audience right off their feet as he strolled by. Hold that thought. . .

Another coup for Harvey Weinstein! According to Variety Oscar® winner Daniel Day-Lewis is in talks with The Weinstein Co. to replace Bardem in the musical. He would play the role of Guido Contini, a famous film director who experiences personal and creative crises while trying to balance all the woman in his life. Penelope Cruz, Marion Cotillard, Sophia Loren, Nicole Kidman and Judi Dench will play the woman. The Robert Marshall-directed musical is inspired by the Fellini film "8 1/2". Michael Tolkin wrote the screenplay, and Anthony Minghella turned in a rewrite before he died.

TWC spokesperson denies a lead has been set and the names being thrown around are pure conjecture. More on this story as it develops...

YouTube clip of Daniel Day-Lewis on the Red Carpet of the Palm Springs International Film Festival Awards Show Gala (below).

Posted by Schmoozequeen at 5:42 PM No comments: Links to this post

Adele attends London "Sex and the City" Premiere After Party 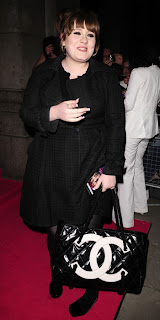 Adele returns to this side of the pond for a series of North American concerts in May-June in support of the stateside release of "19", her #1 UK chart-topping debut album which will be available in digital and traditional CD formats on Tuesday, June 10.

Adele will appear on NBC's "Today Show" on Tuesday, June 10, (the day her album drops in stores); on CBS' "The Saturday Early Show" on June 14 and the "Late Show with David Letterman" on Monday, June 16.

I'll be attending Adele's San Francisco show on Thursday May 22 at Bimbo's Club 365 and will post the highlights next weekend. You can download a copy of the Soul Diva's awesome "19" from iTunes.
www.adele.tv
www.myspace.com/adelelondon

Posted by Schmoozequeen at 12:53 PM No comments: Links to this post