Reitman Delivers: Book Your "Up in the Air" Ticket Now! [Review] 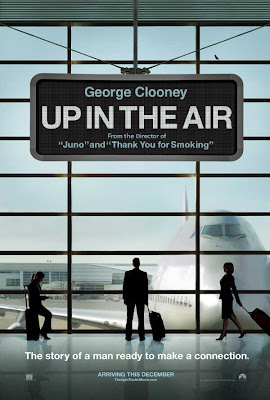 Once in awhile a movie comes along which captivates and entertains on so many levels; a real laugh-out-loud gem! Multi-award winner Up in the Air, is one of those movies. Jason Reitman's (Oscar® nominated director of Juno,) latest brainchild stars Oscar® winner George Clooney as Ryan Bingham, a corporate downsizing expert whose cherished life on the road is threatened just as he is on the cusp of reaching ten million frequent flyer miles and after he's met the frequent-traveler woman of his dreams. Anyone who does alot of flying absolutely must see this movie! You'll be dazzled by the brilliant, fast-paced dialogue and references.

Ryan Bingham is the Organization Man for the 2000s. He never comes to the office. Technically, he doesn't have an office, he has an address where his employer has an office. His life is devoted to visiting other people's offices, and firing them.  The movie opens with interviews of real people who have been fired. “Up in the Air” takes the trust people once had in their jobs and pulls out the rug; a film about the reality of today's world.

“To know me is to fly with me,” Bingham says in an early voice-over, choosing his words, as ever, to sound like an advertising campaign.  Last year, he says, three hundred and twenty-two days were spent travelling, leaving “forty-three miserable days at home,” in Omaha. Now and then, we see his apartment, and it’s just like a hotel suite, minus the personal warmth—no room service, no express checkout, not even a chocolate on the pillow. Bingham seea no purpose nor profit in being at rest. “The slower we move, the faster we die,” he says to a business gathering. “We are not swans. We’re sharks.”

He bumps into his twin soul, Alex played by Vera Farmiga. They get talking in a hotel bar and, before long, they are comparing the contents of their wallets. Not money but credit cards, room keys, memberships, privileges, and points. “I’ll bet it’s huge,” Alex says. “You have no idea,” Bingham replies. He means his tally of air miles, of course, or rather his goal as a miles collector: ten million. He sleeps with Alex that night, but he still can’t divulge the magic number. Alex calls Bingham and confides, “I am the woman you don’t have to worry about. Just think of me as yourself, only with a vagina.” Alex is a fellow-shark. After sex they sit at their laptops and find a common gap in their schedules for the next encounter. Reitman shot the scene from the side showing each opening and closing their laptops in sync with one another. Each becomes a mirror of the other. Bingham and Alex hurl sharp wit at each other like skillfully tossed knives.

Natalie played by multi-award nominee Anna Kendrick has joined the company with a plan to transform the act of termination into an iChat. Rather than travel to another town and fire people, you could stay in one spot and use videoconferencing screens. Bingham is appalled, on two grounds: first, his footloose habits would have to stop, and, second, he does, despite everything, retain some principles—the least you can offer, when you’re destroying a human being, is to do it face to face. Natalie joins Bingham on a string of trips to observe what he does first-hand.

Bingham is both a wise guy and dork. He he tells Natalie, to always stand behind Asians while going through airport security because they wear slip-on shoes, a stereotype he shares in order to facilitate rapid boarding. We are here to make limbo tolerable,” he says of his profession.

Prior to the two being pulled back to corporate headquarters, Bingham decides to attend the wedding of his sister (Melanie Lynskey), taking Alex as his unexpected date. Bingham has always laughed at love but in this scene we can sense his real emotions beginning to surface.

Up in the Air opened with a kick-ass song and then the score went downhill from there.  I would have accentuated the bleakness of the movie with an austere score by a different composer. The indie guitar plucking was annoying in parts and diluted the intensity.  Hey, its not a big deal if you don't notice it, eh?

Up in the Air is everything a fast-faced paced laugh-out-loud dramadey should be...witty, hilarious, dark, romantic, tugs at your heart-strings and ends ultimately on a tragic high note, if there's such a thing. Clooney, Kendrick and Farmiga are outstanding in their roles. A "must see" movie this holiday season!

Up in the Air official Site

Posted by Schmoozequeen at 2:44 PM